In Rod We Trust: Politics, Talking Sticks, and the Ongoing Crisis in Conflict Resolution

When I heard the reports last week of senators, meeting in a bipartisan effort to open the government, using a talking stick, my first thought was ‘that’s cute’. My second response was a sense of disquiet, which I didn’t know to pin down. It has nothing to do with the method itself – I’ve used talking objects myself; in fact, I’ve used them in working with groups long before studying conflict, modelling the use of the conch in Lord of the Flies. But something disturbed me.

This soon clarified itself, as my Facebook feed and a couple of listservs I am on filled up with comments, pointing out use of a conflict management method and celebrating – if not actually taking credit for – its success.

Set aside, whether the modern field of conflict management should be congratulating itself for the success of a method that has been indigenous to North America, Africa and perhaps other locales long before the field formed. Also set aside the question of whether the outcome of the meeting was a success. Certainly, a conversation was held, and it was a better one than had been held in previous attempts. The talking stick, people concur, did help (even if it was once lofted ambiguously – even weaponized, some suggest – with a small elephant sacrificing itself to reopen the US government).

I am always happy when good conversations take place. However, I don’t see, in this story, any recognition of our field, its contributions or methods. On the dismal contrary: it casts the perceived irrelevance of the conflict resolution field in public affairs into sharp relief. We are to saving the day in the conflicts of today’s headlines, as Homer Simpson is to saving NASA.

And yes, in this case, the comparison is not only apt – it is unavoidable.

In one of my favorite episodes of The Simpsons, Deep Space Homer, Homer trains as an astronaut, takes a journey on the space shuttle, and pushes the envelope of snacking in zero gravity.

When an accident damages the locking handle of the shuttle’s hatch, the crew faces certain death upon reentry. Homer - guess who caused the original accident? – fixes the hatch by jamming it shut with a carbon rod. Triumphant Homer returns to earth safely, and explains how he saved....

For those preferring the print version: Cut to the next scene, where we see Homer watching TV despondently from his sofa, viewing the rod  - now displayed on the luxuriant back seat of a limousine – being hailed with a tickertape parade and making the front cover of Time: 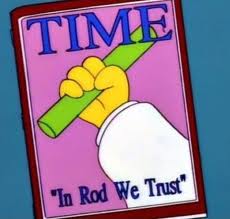 Where was I, when I heard about the senators’ meeting? Where were you? That’s right; figuratively (well, literally, in my case) on the sofa.

15 years ago, Bernie Mayer identified a crisis in the field of conflict resolution: Having achieved growth and increased recognition, he noted, "...the field’s growth has obscured the fact that it is facing a major crisis in achieving broad acceptance, profound impact, or mainstream use. As a result, the conflict resolution field has not yet lived up to its own potential for changing the way conflict is handled in our organizations, communities, or societies. Signs of this crisis are plentiful." (Mayer, Beyond Neutrality, 2004, at 4)

While some may suggest that we have come a long way since this was written in terms of mainstreaming of the field’s practices, the very first symptom of the crisis Mayer identified remains just as acute as it was the day he wrote it: "Conflict Resolution professionals are not significantly involved in the major conflicts of our time." (there, at 4)

"While I was writing this book", wrote Mayer, "War was impending with Iraq, a crisis was brewing concerning nuclear weapons development in North Korea, the situation in the Middle East continued to deteriorate, and India and Pakistan seemed close to war. Perhaps these situations have always been the domain of diplomats, politicians, and area experts, and we should not expect to be part of the policy formation process. However, what is striking is the absence of any members of our professions from any public discussion of these issues. There seem to be a nonstop series of discussions, commentaries, panels, interviews, and debates in the media about these topics. Diplomats, politicians, journalists, military experts, areas experts, political analysts, pollsters, legal experts and an assortment of other media favorites are repeatedly consulted, but not a conflict resolution practitioner is in sight in these discussions…. We might be able to identify a couple of instances in which conflict resolution practitioners have been interviewed or had commentaries published about alternative approaches to dealing with these escalating conflicts, mostly in local media outlets, but that has been the extent of our involvement." (there, at 4)

15 years later, the conflict resolution field has certainly made many advances. Many cases have been resolved, many grassroots initiatives have taken root, and many graduates of the field’s educational programs engage in constructive activity across the country. However, even adopting the rosiest outlook on the state of conflict resolution as a professional field, one thing remains more clear than ever: The field is not viewed as a source of solutions, counsel, or wisdom for the large-scale problems of the day. Last week, with US society arguably more polarized than ever before, and Congress deadlocked with little capacity for cooperation across the line, I heard not a single word – in the press, or through the grapevine – about anybody in positions of power consulting a conflict expert what she thought, or asking a professional mediator for his intervention. I would be overjoyed to see alert readers writing comments in which they correct me on this front – but I’m not holding my breath. The field’s capacity for assisting in such situations is either still unrecognized, or simply discounted; in the perception of the country’s top-level policy makers, there is nothing our field can provide that a colorful stick cannot.

I think that, at the very least, this should make us all say a collective ‘Huh.’

Or, if you are more articulate than I, you can say, collectively, the better phrased form of this that Mayer offers:

Mayer framed the stakes we face in this issue, explaining that the longevity of the field is intertwined with its members capacity to be engaged, as significant players, in the conflicts of our times. “Our continued existence as a field is related to how relevant we are seen to helping to understand and dealing with the major conflicts we read about every day or hear on the nightly news. Right now, we are not seen as very relevant.” (there, at 20).

Mayer didn’t spotlight a crisis without offering solutions; read or reread Beyond Neutrality and you will likely be heartened by how far we have come - and dismayed by how little has changed on certain fronts. Mayer’s suggestions for expanding the roles played by conflict engagement specialists by not limiting their activity to the neutral role have been instrumental in creating a broader field of local practice. They have not yet had the same effect on our impact on the conflicts of the day. He offers sound advice for advancing this cause, and it is time to take it to heart. (More often than with any other book, I've found myself needing to explain to students that if they really want to get Beyond Neutrality's full message, they need to read the whole book.) We seem to have made little progress on the big-picture front, but that is not because it is impossible for us to do so.

If the story of the stick has any meaning for me, it is to remind us that we continue to face the big-picture conflict challenge today, just as we always have; the job isn’t done, by a long shot. Aspects of the crisis Mayer defined are just as evident today as they were 15 years ago, and our field has a long way to go, before it realizes its true potential.