Words on paper (or screen) are sometimes just too plain and boring. I have read somewhere (actually here) that pictures help with recollection more than words while pictures and words combined are even better than just pictures.
I…
Continue

With religious symbols being installed at the new 9/11 Memorial and Museum, conflict was bound to arise. [For more on this story, you can Google it or check out this article]. The Mayor of NYC pointed out that religion comforted many during 9/11, and his opposition believes it's inappropriate mingling of church and state. I'm not looking to debate religion and politics, but…

The aging process for many is often frustrating, scary, and confusing. So many emotions play a part in the person who is facing these new changes as well as those who love them. When decisions need to be made in regards to their care, it can be a challenging with so many obstacles and unknowns.

Often times, family members who are apart of making decisions live in different regions, trying to cope with their own emotions, struggle with financial concerns, and sometimes old conflicts… Continue

The latest issue of the Corporate Crime Reporter features an interview with Patrick Gnazzo, an attorney who has held a variety of executive positions, including as the former chief compliance officer at Computer Associates. Gnazzo says that the optimum set up for a corporation is "a strong ethics and compliance office and a strong ombudsman’s office." He illustrates this position with a story from his work as the chief…
Continue

Why your Mother was wrong about confrontation

There were always 1 of 2 things happening when my mother used to tell me that saying 1: I was…

The U.S. intelligence agency responsible for national security and military imagery and mapping has established an Ombuds program for internal and external stakeholders. According to a new website, "The NGA Ombudsman is an informal resource to help answer questions and resolve concerns from employees and external consumers of NGA products about inefficiencies, inconsistent application of policies, potential unfair…

I found this article from Dan Rockwell, the @LeadershipFreak on twitter.

Sometimes it is easy to have tunnel-vision when it comes to conflict resolution curriculum. Every student, professor, practitioner, etc. has very different concepts of how they want to focus their skills. For example, I am currently a law student; therefore, my ADR coursework has been geared toward supplementing my legal skills - improving interpersonal skills, negotiation techniques, communication, transparency, etc. However, many of my other classmates or professors have focus on improving…

Call for Proposals: Annual Conference of the International Ombudsman Association

The professional association for organizational ombuds is seeking proposals for its seventh annual conference in Houston, Texas on April 15–18, 2012.  The IOA Conference Committee is accepting proposals from potential speakers through Friday, September 16, 2011.  Speakers need not be practicing ombuds; past plenary and concurrent sessions have featured attorneys, mediators, HR experts, researchers, organizational development specialists, and executives.

I have a very broad question concerning post mediation.  If the court orders mediation in a small claims case, what typically happens if the mediation session is not successful and the case reverts to the courts?  I am asking for feedback and general comments based on this limited information.  What can be expected from the courts in cases such as these? 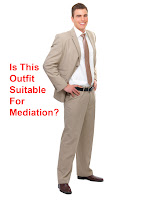 Being a reflective practitioner is critical to being an effective mediator, ombuds, conflict coach, and any other conflict resolution role. The preceding statement is nothing new- I have said it many times on this blog as well as many others having said it in many other outlets.

A reflective practice can,… Continue

Caucus On Mediation - Join my blog!

I'd like to invite you to join my special guests and me.

JAMS Announces the Launch of Its New ADR Blog

JAMS, the largest private provider of mediation and arbitration services worldwide, announced that it has launched a new blog to discuss trends, news and issues within Alternative Dispute Resolution.

Some of the topics that will be covered include discussions about legal processes affecting ADR, articles from specific practice areas, posts that highlight organizations supporting ADR in the United States and abroad and more.

Transparent Mediation: Giving Away Our Strategies

Alan E. Gross- When mediators act as trainers, they often offer classes designed to improve conflict management and to convert disputes into…

Can Motivation Resolve Conflicts in Businesses?

This week I watched an interesting TED talk about extrinsic and intrinsic motivation. And it made me wonder if this could help conflict resolution in businesses. [As a side note, TED is an outlet that posts talks on a variety of topics. I have yet to find one that isn't incredibly interesting and practical. If you haven't checked it out, you should - www.ted.com]. I've posted the talk below, and I highly recommend you watch at least the first…

Review of "Transformative Mediation: A Sourcebook"

I'm pleased to note that mediate.com has published my review of the latest addition to the transformative mediation literature, Transformative Mediation - A Sourcebook  Resources for Conflict Intervention Practitioners and…

Well, most of 'loyal' readers know by know that I am doing a PhD on Nonverbal Communication. Have a look at my YouTube submission for Griffith University's "3 Minute Thesis Contest" in which each contestant has to describe their thesis for an academic audience in, you guessed it, only three minutes.

The three main concepts of my research, and described below, are Nonverbal Communication, Mediation, Semiotics,…
Continue

Past, Present, Future - There is a story there

This weekend I had the privilege to read over the story of my great-grandparents journey as they lived in the Netherlands and later moved to Canada.  Amazing people!  Such courage and determination they showed!