Does ADR offer any training in emotional intelligence. It seems like a natural skill set that would aid in dispute resolution?

Tech For Better, Not For Worse: Online Dispute Resolution In Everyday Life Join us as two died-in-the-wool technology enthusiasts explore communication technology and conflict in our everyday lives. We'll think together about some of the core principles that promote constructive conflict resolution across the interwebs and share examples of communication…

November 6th :   Nipped in the Bud-Not in the Butt

The Sad State of Legal Mediaton

In this blog entry, I make my argument that mediation, as most often conducted in litigated cases, is far less helpful to the disputants than it could be.  I go so far as to suggest that what holds mediation back from its potential is the too-cozy relationship between mediators and the lawyers who refer them cases.

I was invited to join ADR by a colleague who suggested that my work in emotional intelligence might be of interest to people in this forum. If so I would appreciate hearing from anyone that would like to connect.

In the meantime if you are interested in me and my work, I suggest you look at my website www.cjwolfe.com and that you may have an interest in some of the work I do on my radio show which is featured on my own website and on the public…

Our perceptions of what actually occurred in a dispute are not all that reliable in the aftermath of hurtful interactions. Our emotional experiences of conflict have a huge impact on us and one of the results is that our perspective on what happened gets muddled and muddied. What we think is an absolute truth about the event and the exchange about it is often not the other person’s perception of the absolute truth. Essentially, facts can be easily distorted and we end up with our blind spots…

You Thought Your Marriage Was Miserable- Wait Till You Get to Court... The breakup of a marriage almost always involves some level of conflict between spouses, but the process of litigation during divorce ratchets that conflict up to a level… 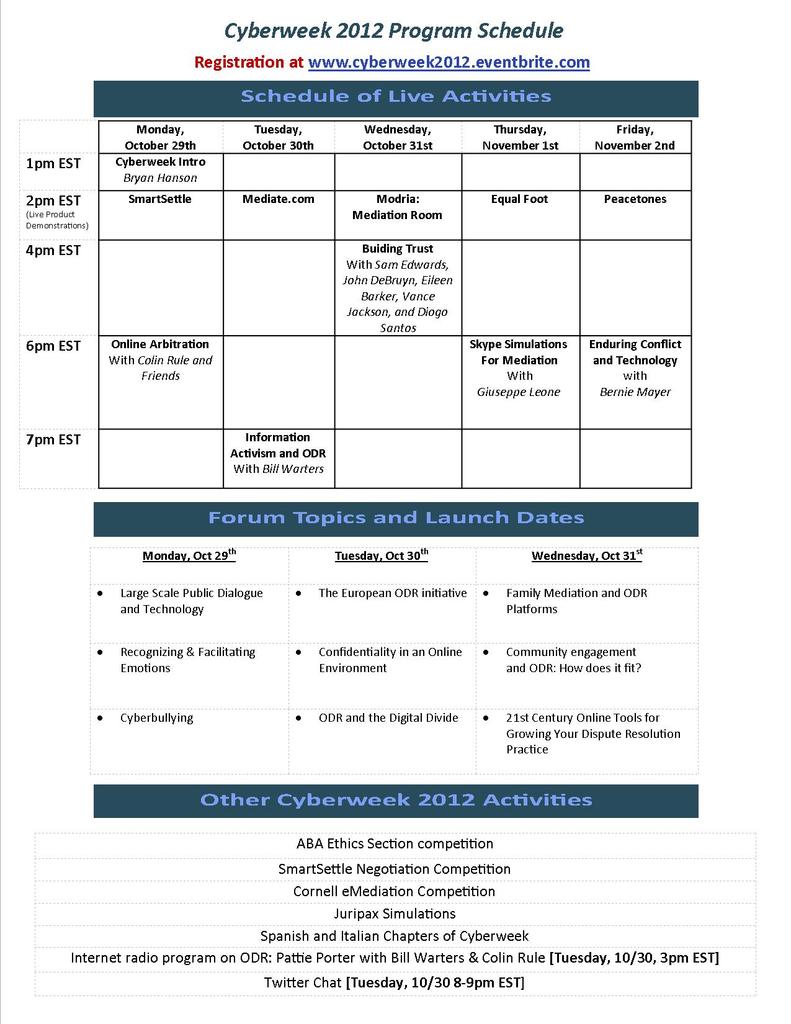 Shots fired in the The Online Education Wars

The State of Minnesota has  fired warning shots across the bows of MOOCs such as Coursera and similiar courses, by notifying Coursera that offering its courses to Minnesota residents is illegal. The state's explanations of why it has acted this…

On the road to Cyberweek? check this out on the way!

E-Mediation - state of the art, and future trends: http://papers.ssrn.com/sol3/papers.cfm?abstract_id=2161451

New York – JAMS, the largest private provider of mediation and arbitration services worldwide, today announced the addition of Hon. Ariel E. Belen (Ret.) to its panel. Justice Belen will be based in the JAMS New York Resolution Center. He will serve as an arbitrator, mediator and special master in a variety of disputes including Business/Commercial, Employment,…

STANDING UP FOR OURSELF

Sometimes during conflict we lose our confidence and composure. We may become plagued with self-doubt and feel we are not able to stand up for ourselves. We back down at these times and give in to the other person. We may regret doing so and admonish ourselves for lack of courage or ‘guts’. This and other self-limiting beliefs eat away at our self-esteem and we may feel all the more helpless and powerless.

More things may get in our way of standing up for ourselves, too. For instance,…

The State and Growth of Community Mediation Pay Attention to the Man behind the Curtain! The Human Side of Online Learning

Pay Attention to the Man behind the Curtain! The Human… One way that some of us cope when we are in conflict is to criticize the other person for something he or she is saying or doing. Criticism takes many forms. For instance, it may be by being condescending, pointing out and putting down things we don’t approve of, finding fault when things don’t suit or fit our perspective, ignoring the person or demonstrating a dismissive attitude, being sarcastic about or correcting things the person says, and so on. Criticizing in these and other ways… Even if you think you know how much it costs to sue someone, do you really understand the full range of risks and costs? Join Stephen Kotev for part two of our conversation with attorney and mediator, Daniel…