The June 2011 Webinar will take place:

As always the webinars are free, but do require registration. Please register at: 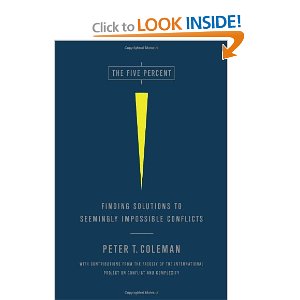 One in every twenty difficult conflicts ends up not in a calm reconciliation or tolerable standoff but as an acute and lasting antagonism. Such conflicts—the five percent—can be found among the diplomatic and political clashes we read about every day in the newspaper but also, and in a no less damaging and dangerous form, in our private and personal lives, within families, in workplaces, and among neighbors. These self-perpetuating conflicts resist mediation, defy conventional wisdom, and drag on and on, worsening over time.

Once we get pulled in, it is nearly impossible to escape. The five percent rule us. So what can we do when we find ourselves ensnared? According to Dr. Peter T. Coleman, to contend with this destructive species of conflict we must understand the invisible dynamics at work. Coleman has extensively researched the essence of conflict in his “Intractable Conflict Lab,” the first research facility devoted to the study of polarizing conversations and seemingly unresolveable disagreements.

Informed by lessons drawn from practical experience, advances in complexity theory, and the psychological and social currents that drive conflicts both international and domestic, Coleman offers innovative new strategies for dealing with disputes of all types, ranging from abortion debates to the enmity between Israelis and Palestinians.

A timely, paradigm-shifting look at conflict, The Five Percent is an invaluable guide to preventing even the most fractious negotiations from foundering.

Columbia University. He is currently Associate Professor of Psychology and Education at Columbia University where he holds a joint-appointment at Teachers College and The Earth Institute and teaches courses in Conflict Resolution, Social Psychology, and Social Science Research. Dr. Coleman is Director of the International Center for Cooperation and Conflict Resolution (ICCCR) at Teachers College, Columbia University, Chair of Columbia University’s Advanced Consortium on Cooperation, Conflict, and Complexity (ACCCC), and a research affiliate of the International Center for Complexity and Conflict (ICCC) at The Warsaw School for Social Psychology in Warsaw, Poland. He has conducted research on ingroup/outgroup formation, the mediation of inter-ethnic conflict, intractable conflict, complexity theory and conflict, identity formation, moral emotions, ripeness and conflict, and on the conditions and processes which foster the constructive use of social power. In 2003, he became the first recipient of the Early Career Award from the American Psychological Association, Division 48: Society for the Study of Peace, Conflict, and Violence. Dr. Coleman co-edits The Handbook of Conflict Resolution: Theory and Practice (2000; 2nd edition 2006), and has authored over 60 journal articles and chapters. He is also a New York State certified mediator and experienced consultant.

Check out his book, The Five Percent: Finding Solutions to Seemingly Impossible Conflicts at amazon.

Permalink Reply by Bryan Hanson on June 17, 2011 at 1:00pm
The streaming archive is now available for viewing at the top of this page. It was a great session and definitely an educational experience. Please feel free to drop any comments or questions here to help continue the dialogue.