Rep. King- Hearings? How About Facilitation?

(Originally posted at www.EnjoyMediation.com)
We all know the story about Rep. Peter King and the hearings he has put together on the radicalization of members of the Muslim community in the United States. 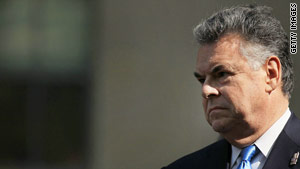 King states, "The chairman of the House Committee on Homeland Security -- New York GOP Rep. Peter King -- has said Thursday's hearing is necessary to explore, among other things, the extent to which al Qaeda is trying to influence and indoctrinate U.S. Muslims."
From a conflict resolution professional point of view (yes, I consider myself a professional!), if the goal is to 'explore' and ultimately establish where and when there are disconnects between the government and the Muslim community, how is it that a Congressional hearing would be the best forum to do this?
This design seems very similar to the one held for JP Morgan to be scolded by Congress members.  How could a hearing, designed to extremely one sided as it is a group questioning a person (with all the press to take pictures and film) build a collaborative partnership?
If there are people conspiring against us, yes they should be dealt with.  That is what we have law enforcement investigations for (Police, FBI, CIA, etc.) where as I see this whole process (the hearings), again and being done in public and in front of the media circus, a superficial gesture whose impact will be equally superficial not offering any options on how to move forward that builds trust and safety (yes, the two go hand and hand).
I find it hard to believe I am the only one who thinks the Congressional Hearing approach, and it's lead up of press releases and comments are combative and further creating people to dig their heals into the sand which is positional based.
Finally, as not wanting to be one of those people who whinge and do not offer an alternative, here is what I think could be more productive:
Hold a facilitative group meeting.
Set a goal and agenda of the meeting.
Set a timetable.
Include representatives from all the stakeholders- King/Congress, Muslim community leaders, and law enforcement.  Each side not only gets to explain their side and their issues/complaints, but also they get to the other side's as well.  This is crucial as it can show there are joint goals.
Design it to be in a private setting- not in front of 'the world'.  Design it to be a collaborative set-up and not a chair/table facing your interrogators/questioners. We all act differently in front of cameras.  A private setting came be more open- more open to speaking more freely and also express concerns.
Have a neutral (as much as possible) moderator/facilitator.  No not president Obama but rather a qualified person who understands who to facilitate a meeting who will not give their own input but rather guide the process.  There are many well qualified people out their that possess the skills needed- experience in government, interfaith, and facilitation.
Work towards moving forward.  In order to move forward, past experiences must be voiced.  The main component of the meeting should be how can all the stakeholders work together, collaboratively in order to make America safer (remember- setting the goal).
This neutral can even release a report afterwards detailing the situation, according to each perspective and measures for moving forward.
Privacy/confidentiality.  Adding to meeting privately to reduce temptation to grandstand for the cameras, all parties should agree to not release comments to the media until the meeting(s) are complete.  Throughout, and at its completion, a joint statement should be used.  If they are working towards a collaborative partnership, then a releasing joint statements should not me too far fetched of an idea.
What will come of these hearings?  My thoughts are further polarizing of sides, people becoming more skeptical and resentful (one one side with the government, and the other side against a religion).  I still think it is possible for all groups involved to work together, in a positive collaborative manner.  One that builds understanding and trust.  This will create a safer America.
Do I think I think it can work.  Sure, and I am not the only one who thinks so.  Read the suggestions in the open letter sent by a coalition of over 80 local interfaith leaders in the New York area:

A more constructive approach to strengthening the bonds of trust that bolster our security and protect our values would be convening a dialogue among faith leaders, law enforcement and elected officials such as yourself. It is with a spirit of goodwill and sincere hope that we propose beginning such an initiative with you.

The full letter can be read [here].

Finally, as trying to be open-minded, what are the thoughts and comments of my fellow mediators and conflict specialists?  How those not in our field- Is there a benefit of these hearings that I have missed?

You can read more on this from CNN: Analysis: King risks alienating ally in fight against homegrown terror

These views are my own and do not represent the views of any organization I am affiliated with or work with and for.

I agree with your analysis and your forward thinking recommendations.  Representative King is catering to his constituents with his grand standing activities.  Previously, he embraced the IRA which pleased his voters many of whom trace their ancestry to Ireland.  He contends that there is no contradiction in his support of the IRA and the present hearings.  Oh no, the IRA are freedom fighters against British oppression and therefore are not terrorists.  He enjoys the media spotlight and he choses to spark controversey in the name of patriotism, the last refuge of scoundrels.  The muslim Americans serve as his scapegoat as Representative King further ingratiates himself with his constituents, the working class, the blue collar and civil servants of Long Island who work in NYC.  This is his motivation behind his actions.  He is validating his and the narrow minded views of the people who placed him in power.

The parallels with Joe McCarthy are frightening.  "Have you no sense of decency Representative King?"  Again Jeff, your recommendations are worthy of further discussion if this were the true purpose of the hearings.  I contend that the reason for the hearings is to sow the seeds of discord within American society and to stigmatize a minority in order to aggrandize Representative King's power base and his vocal constituents.  Fixating on the scapegoat is the convenient ploy for politicians and people in power throughout history to use in support of their agenda.   Ironically, the Irish American Catholics, King's constituents,  endured the same prejudice and scorn as they tried to assimilate into American society in the mid 19th century.  I further agree with you that we have government agencies in place to safeguard our country from those who wish to destroy it and our freedoms.  Let the agencis do their jobs.

In closing, I support your thoughts on mediation based on a series of stated and unstated needs for US security.  The issue is that our stated and unstated security needs are largely being met by the federal and local law enforcement agencies.  There is no need for Representative King's initiatives in their present form.  There is a need for more communication between Muslim Americans and American society in general with a deliberate underscore on the word "Americans."

"The chairman of the House Committee on Homeland Security -- New York GOP Rep. Peter King -- has said Thursday's hearing is necessary to explore, among other things, the extent to which al Qaeda is trying to influence and indoctrinate U.S. Muslims."

COMMENT:  Does Pope Benedict XVth in Rome influence Representative King's thinking on the role of Irish-American Catholics in American government and society?  Everyone knows that St. Francis College in Brooklyn, NY and Notre Dame Law School(Representative King's alma mater and law school respectively) are hotbeds for Catholic subversive activity in the USA directed from the Vatican. The same is probably true of me and my allegiance to the Jesuits of Creighton University!  I notice that Rep. King does not list his religion on his information page.  It was not too long ago that Irish Americans(Catholics) faced the same prejudice as Muslim Americans now encounter from the European immigrants or so-called established Americans who proceeded them to our shores.  I am disappointed that cultural divisiveness continues to manifest itself in our society.  It is a deplorable aspect of our melting pot society that requires new ethnic groups to suffer torment in the fires of ignorance and hate before they are placed in the pot and blend with the rest of society.  Representative King appeals to his angry and frustrated constituents  who want to keep emergent groups down and the existing power structure intact.

During WWII, Italian Americans were suspected of supporting Mussolini and facism.  I imagine my dear Aunt Theresa cooking her special tomato sauce behind a barbed wire fence in an internment camp in New Jersey or Arizona.  Granted she had a bust of Mussolini in her dining room, but this did not make her an outright facist.  She was happy that the trains in Italy ran on time.

The reason for Representative King's sessions remain suspect.  I contend that he is grandstanding at the expense of an emerging ethnic group, the Muslim Americans.  In Michigan, this state is home to the largest group of Arabs outside of the Middle East.  The FBI and local law enforcement work closely with the various ME ethnic communities to protect their rights and to monitor potential terrorist activities with the support of the imams.  When I was Director of Finance for the Democratic Party in the 11th Congressional District, we met with the leaders of the Arab communities in Michigan.  Their needs are not only underserved, they are unmet and not even represented in Congress by the incumbent Congressman.  Why?  Because they are afraid that the rights that they currently have will be further restricted if they speak out against prejudice and injustice.  They are second class citizens in many ways according to what they told me during the election campaign.  The hearings are unnecessary and a waste of time and taxpayers money.  The FBI is vigilant.  What is needed is acceptance of other people, their religion and world views.  Just as the Irish were assimilated fully into American society, Representative King should review the pages of history especially as St. Patrick's Day approaches when all Americans are Irish, even the Muslim Americans.