Talking Tough On Twitter: Taking the Sting Out of Social Media Conversations 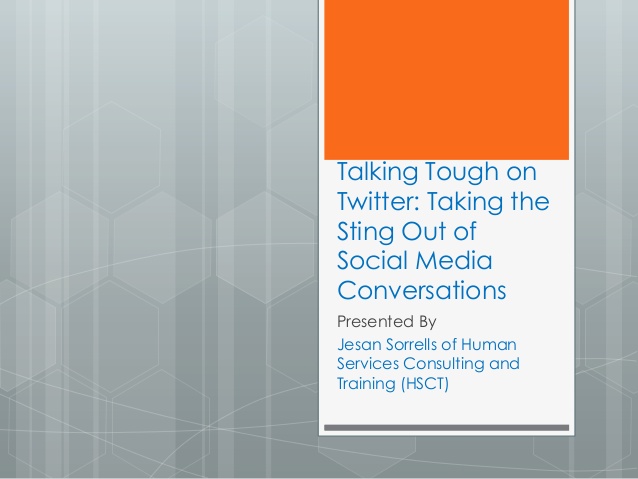 Last week, we were a guest of Choose2Talk (https://www.facebook.com/Choose2Talk), a new start-up, restorative justice and mediation agency based out of Detroit, Michigan. We were the guest speaker in a webinar discussion around social media and conflict resolution skill development. Below is a summary of the Slideshare notes from that presentation. Feel free to follow along via the HSCT blog posting here, or just read the summaries. By the way, the juiciest stuff is at the end.

Social media is about relationships and we are at the vanguard of an evolution in human communication, connection, revenue generation and product development, just as important as anything that happened in the 70’s, 80’s or 90’s. Young millenials (people age 18-25) get this as well as the upcoming post-millenial generation (people age 13-19). However, this is the generation that is the most lacking in focus, self-awareness and empathy. All conflict is relational and engaging with conflicts, bullying, intimidation and harassment in the social sphere effectively requires an excellent understanding of where social overlaps with reality in the areas of cognition, connection and collaboration.

Cultural communication definitions, based in the research of the noted anthropologist, Edward T. Hall, focuses on context as the background framework that supports and event or communication about an event. High context and low context tend to reference cultural communication patterns that show up in online interactions as well as in “real life.” Difficult communication happens when we try to talk about anything that is hard, awkward, uncomfortable or that matters to one, or both, of the partners in the communication situation. Stories, myths, ideas, rumors, gossip help human beings create meaning out of a world that seems meaningless, maintain order and rationality (even though most stories are emotionally based) and allow us to “have control” over randomness and chaos.

Contextual communication happens in online interactions—particularly in the realm of social interactions. Twitter and Instagram serve as the strongest examples of low context communication masquerading as high context communications. As the internet in general and social media in particular transitions more and more to the dominance of images over text (although the signs and symbols involved in text are image-based themselves) more and more of social media interactions and communications will have to be focuses around high-context understanding. In the areas of cyber-bullying and harassment of individuals online, images, videos and text are powerful forces that can destroy individuals if not effectively neutralized.

As we can see, there is a path to conflict that goes through difficulty all the way to conflict. How we deal with difficulty (i.e. stresses, disappointments, failures, etc.) was set from the time that we were 3 years old. These patterns of behaviors carry into confrontation and ultimately into how we deal with conflicts in our life. Confrontations do not have to lead to conflicts. This diagram looks set in stone, but it’s not. And when difficulties happen offline, they are often transferred into the support groups of like-minded people online who reinforce our approaches.

Images, text and videos support the creation of stories, myths and legends. In the social sphere, stories are created in 140 characters, via hashtag designations, or the long form of blogging. These methods have gradually replaced the traditional methods of communicating meaning via TV, radio or commercial advertising. Not to say that those methods don’t exist anymore, but the ability for them to dominate the meaning making public sphere has lessened particularly due to the speed and immediacy of social sharing. Rumors, gossip and innuendo have historically been the methods by which personal group cohesion has been maintained through in/out designations. This happens more so for all demographics in online interactions and communications.

All this information seems fairly obvious, until you consider the level of times that a teen between the ages of 13 and 19 has felt bullied, intimidated or harassed online, and not by an adult, but by another teen or groups of teens.

See this article here http://usnews.nbcnews.com/_news/2013/11/20/21551488-charges-dropped.... This serves as an example of the struggles with social interaction that post-millenials especially will have to confront well into the end of this century and into the next.

Following are four steps that teens should develop in order to facilitate better outcomes in online communications and address bullying and intimidation:

Learn and practice active listening skills by not just waiting for your turn to speak, but really listening to the other person.
The other piece to remember is that sometimes other people have been give enough chances, outlets and methods to be “heard.”
Develop critical thinking skills focused around asking three critical questions:

Monitoring what we put in our minds is key.

Creating emotional/intellectual maturity comes in many ways and is a long-term process, but it is most critical in the area of understanding where images come from and placing images and high context material in the appropriate historical, cultural and social cognitive context.

Have healthy critical reasoning around stories, myths, rumors and gossip.

Following these steps will not only reduce the incidents of cyberbulllying but will also ensure that teens and others will be able to develop meaningful, long-term skills in the social media arena that will effectively translate into the off line world as well throughout their adulthood.