"What's Happening?" Blog is a weekly round up of the all the ADR news, jobs, events and more.  Check it out each week and view past news [HERE]

...We had come to Libya to work with our Libyan colleagues as part of the United States Institute of Peace's (USIP) ongoing justice and security dialogues, bringing together police, local government, elders, doctors, engineers, professors, militia, youth and others who make up the fabric of Libyan society, to discuss justice and security challenges and find ways to work together to address them.  In order to really understand the immense challenges ahead for this fledgling new nation, as well as the tremendous potential that exist in Libya, all one needs to do is follow our travelogue:

As wheels touched down in Tripoli, so began my third trip to the 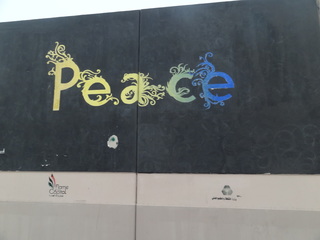 Libyan capitol since the revolution ended.  My first visit came shortly after the fighting to oust Libyan dictator Gadaffi had ended, and the new transitional government sought to avoid, or at least gird for, the many pitfalls that often follow such violence. Between my own visits, my colleagues have been in and out of Libya multiple times, providing as close to an uninterrupted presence and continuity as possible in the face of limited budgets and resources.

As we drove from the airport, I noticed some minimal upgrades in security that had been made since my last visit.  Upon arriving at our hotel – off the beaten path and far from the center of the city...

...In fact, during my first trip to Tripoli, a full-fledged rocket propelled grenade battle erupted down the street from my hotel.   But you can always measure what your own level of alertness needs to be by judging how those who experience such events daily react, and since no one else at our dinner seemed overly concerned, we went on eating. But then there was a loud, unsettling “boom.”  At this point, a number of people stopped what they were doing and turned toward the blast – including the wait staff.  After one more blast, we were all alert and silent.

We are currently accepting proposals for the monthly ADRHub webinar series. Presenting for one of these webinars provides a great opportunity to share your expertise and to spread your work across a large community of ADR practitioners, scholars and the public that is interested in alternative dispute resolution.

With over 2000 members, the ADRhub.com is a valuable web resource for all the alternative dispute resolution community. ADRhub.com is a portal where you may get all your ADR related news, events, and be able to stay in touch with others in the community.

The Heart, Mind and Smartphone of the Negotiator

Noam Ebner- Forget everything you think you know about negotiating, mediating and engaging

with conflict via email. That's what I did.

Exactly three years ago, I finished work on a chapter for a negotiation textbook

(Michael Benoliel’sNegotiation Excellence: Successful Deal Making). The chapter focused on negotiation via email, and described the challenges, pitfalls and benefits of working thought this medium.

...The outcome was an entirely new chapter, Negotiation via (the New) Email, which goes beyond the “traditional” literature on email negotiation by suggesting that mail can no longer be categorized as asynchronous communication, by applying communications and negotiation theory to smartphones,  and by trying to provide frameworks for understanding, and negotiating through, modes of email and email –like communication platforms that are likely to evolve over the next few years.

Although Cyberweek 2013 has officially ended you can still catch all the webinar archives while you can still join in on the forum discussions.  Have a look a some below or click the link above to access all of them:

Mobile Mediation: Mediation as Close as Your Telephone (20 replies)

November 5th :  Handling the Holidays Before They Handle You

A Transformative Interpretation of a Fight between Friends by Dan Simon

Blinder than a Bat - What Organizations and Leaders Need to Do to R...